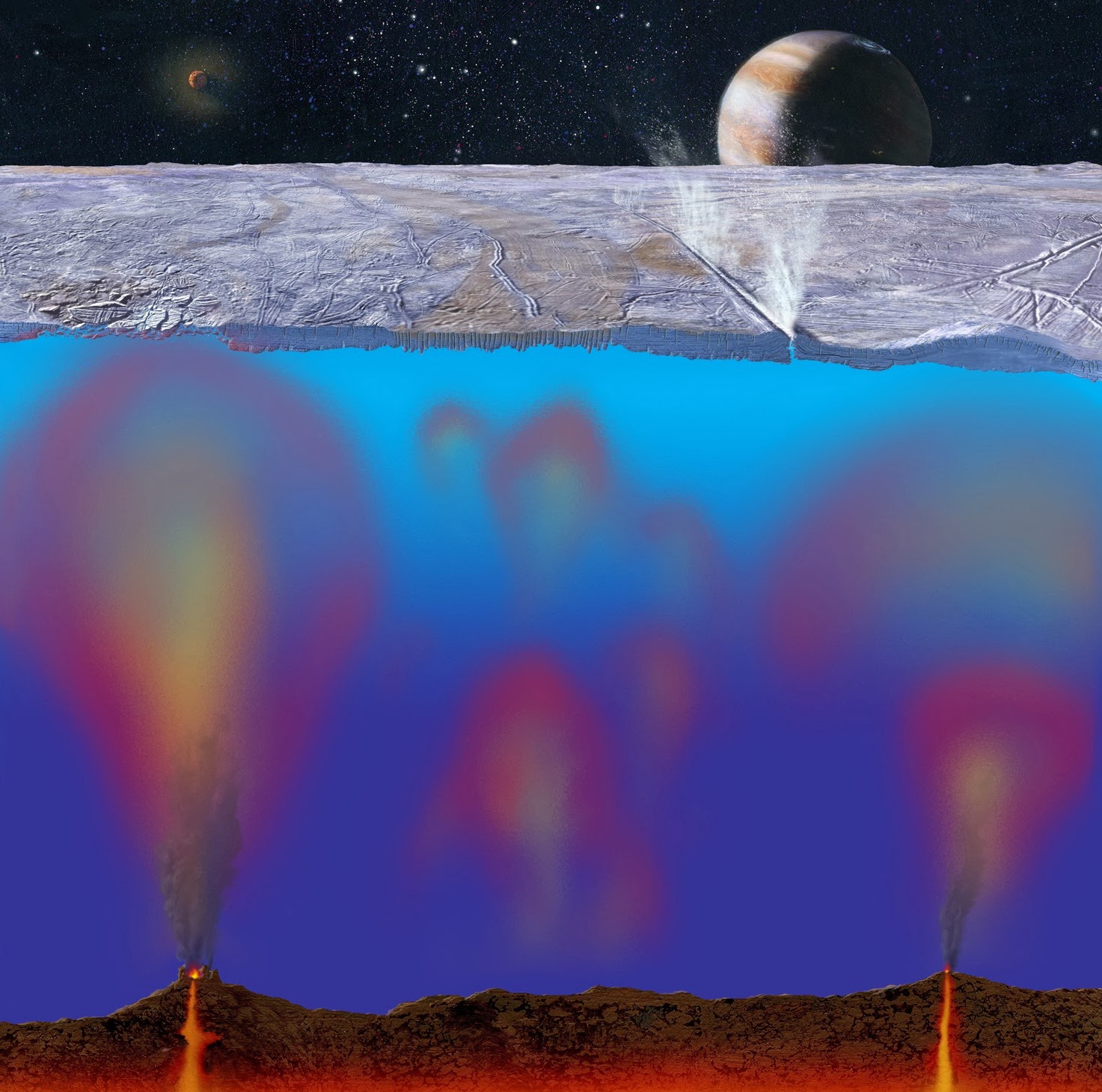 «Planetary geologist Philip Horzempa returns with a new post giving an update on the proposed Europa Clipper mission.
President Obama’s recently released FY2014 budget proposal, unfortunately, contains no funding for a mission to Europa.  In fact, the budget document states that NASA not only is not funding such a mission, but that it cannot fund it.  Several sources of budget constraints appear to be stalling any new start.  In addition to the sequester, NASA’s Science Mission Directorate has the ongoing money drain of the Jams Webb Space Telescope (JWST).  That funding burden will not lessen until about 2017 – 2018.  One could imagine that NASA may see a funding wedge appear at about that time, with a new start for a Europa mission possible in FY 2015 or 2016.  The early years of a space project require minimal funding, allowing a program to begin Phase A and Phase B (design and definition) a few years before the fiscal “heavy-lifting” of Phases C and D (detailed design, construction and testing) .In the meantime, the Europa team has continued to refine the design of what they refer to as the Europa Clipper (see Van’s post of September 24, 2012).  Whenever they are given the “go-ahead” from the White House, they will have a mission ready to proceed to implementation.


The Europa science community believe they have developed a cost-effective, yet scientifically compelling, mission to the ice-covered Galilean satellite.  After considering an orbiter, the consensus is that a multi-flyby spacecraft would return more science for the same cost ceiling.


The Europa Clipper embodies the modified FBC (faster, better, cheaper) approach.  It is seeking to capture as much of the Jupiter Europa Orbiter (JEO) flagship science as possible using a smart, elegant, lower-cost design.  This past January, the Europa team presented the results of their latest “scrub” of the Clipper mission.  This Europa Clipper design refinement can be seen here.


The plan is to launch in 2021, followed by one Venus and two Earth gravity assists.  Six years after launch, with the gravity assist of a Ganymede flyby, the Clipper will enter orbit around Jupiter.  Over the next 2.5 years, it will perform 32 flybys during its prime mission, with closest approach altitudes of 25 - 100 kilometers (actually 34 total flybys will occur, but only 32 are optimal for science).  In order to reduce planning costs, the timeline of each flyby will be essentially identical. (Figure 1) However, the trajectory of each flyby will bring it over a different sector of Europa.  This will provide global medium-resolution coverage from the Topographic Imager.

It was felt that the Europa Clipper mission should also provide data that would feed-forward to a future soft lander.  This concept of reconnaissance has seen a rebirth at NASA, with ongoing orbital missions at the Moon and Mars.  The addition of a Reconnaissance Camera was deemed to be essential for providing images for landing site surveys ( lander-scale characterization of the surface is needed).  The Recon camera (a push-broom design) will produce 20 x n km images at resolutions of as fine as 0.5 meters.  The limitation on the number of such high-resolution images comes from the large amount of data in each photo.  In turn, the swath length will be determined by the amount of down-link time available.  The Recon camera will utilize an innovative flip-mirror to enable stereo imaging of a scene in a single pass.  It will be able to obtain views 15 degrees from nadir (Figure 2)  It is believed that about 15 candidate landing sites will need to be surveyed in order to be able to down-select to 2, a primary and a backup.  That selection will be done by some future team of Europa Lander scientists and engineers.

A separate, smaller, and gimbaled gravity science antenna will allow the collection of gravity data during flybys. (Figure 3).  Because the cameras and other remote sensing instruments are mounted to the spacecraft body, the main antenna cannot be pointed to Earth during flybys to allow tracking for gravity measurements.  The separate antenna will be kept pointed at Earth during flybys to permit the important gravity measurements that will reveal much of the internal structure of Europa.

During this latest iteration, the Europa team was allowed to raise the cost cap from $1.7 billion to a total of $2.0 billion.  (This is still less than half the estimated cost of the previously proposed Jupiter Europa Orbiter.)  This increase allowed the addition of a Magnetometer and Langmuir Probes to the payload suite.  Rounding out the instrument complement are an Ice-Penetrating Radar, a Thermal Imager, a Neutral-Mass Spectrometer and a Short-Wave Infra-Red Spectrometer.  Figure 4 shows some of the payload complement and where they will sit on the spacecraft.


The highly-capable instrument suite is one reason that the Europa Clipper would cost more than missions such as JUICE or the proposed Io Observer.  The scope and resilience of the Clipper mission means that it must survive an intense radiation exposure over its 2.5-year mission.  This data-intensive mission must also use a reliable, high-energy power source.
The Europa Clipper spacecraft benefits from the heritage of the Galileo and Juno Jupiter Orbiters in its approach to radiation protection.The Clipper will utilize 150 kg. of dedicated radiation shielding which is one-half of that planned for the earlier JEO (Jupiter Europa Orbiter)  proposal.  The Clipper will use a scheme of nested radiation protection for its electronics (Figure 5).


For example, the Spacecraft structure and propulsion system will provide a measure of radiation protection, essentially for free.  With intelligent placement, the project will utilize much less expensive 100 and 300 kilo-rad hard parts.  Individual payload electronics have their own shielding, while the use of a central electronics vault is also part of the protection plan.  As a result of this approach, the Clipper team will not need to fund an expensive development effort to build mega-rad hard avionics.